The overall India PC shipments for Q2 2014 stood at 2.55 million units i.e. a substantial quarter-on-quarter growth of 23.6% over Q1 2014 and year-on-year drop of 27.8% over Q2 2013.  The market remained upbeat buoyed by business purchases, as well as channel intake of low priced PCs at the end of the quarter.

The commercial PC segment emerged stronger against expected performance with 1.38 million units shipped in Q2 2014 with a quarter-on-quarter growth of 34.5% over Q1 2014. A clear mandate in elections signaled a mark of recovery in the economy. Against last calendar year, business prospects are expected to remain moderately better in the coming six months.

The Overall consumer PC market recorded 1.16 million units, a quarter-on-quarter growth of 12.8% over Q1 2014. “The overall sentiments have picked up and IDC observes improved discretionary spending from consumers across devices. It is expected to have a  positive influence on the market as we enter the festival season starting Onam,” comments Manish Yadav, Market Analyst, Client Devices, IDC India. The retail and online acceptance of new product category such as Bing SKU facilitated growth this quarter. 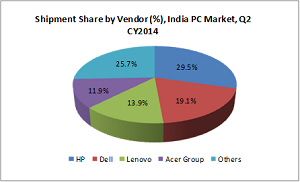 HP rallied again to their top spot with a market share of 29.5% in the India PC market. They grew by 82.1% quarter-on-quarter over Q1 2014. Their execution of large education deals in the state government of Tamil Nadu ensured the growth in commercial business. They were equally supported with the growth in their consumer business too. Price competitiveness and well spread partner coverage across the country has been HP’s key strength. The successful launch of Bing SKU and the first mover advantage it had garnered, aided HP’s growth in Q2 2014.

Dell captured the second spot with a market share of 19.1%. Dell continues to record substantial growth owing to its recent channel realignment, improved management of its partners, investment on quality resources and the addition of new partners both in SMB and enterprise business. Their participation in DGS&D aided their commercial business incrementally.

Lenovo took the third spot with 13.9% market share in the quarter. It made a recovery in Q2 after initial concerns around inventory fillings and channel engagement measures.  Growing focus on mid market accounts and expanding coverage should boost their growth in the commercial segment in the coming months.

PC market looks to recuperate in due course of time. “IDC anticipates increase in consumer spending both as a result of seasonality owing to festive buying and cautious end user spending on high end smart phones. This indeed was driving away wallet share in the recent past,” adds Kiran Kumar, Research Manager, Client Devices, IDC India.

To curb the sale of counterfeit ink bottles, counterfeit ribbon cartridges and to protect the rights of its customers, Epson’s vigilance team and local...
Read more

ChannelDrive.in is an effort to bring together a unique platform bridging the ICT vendor community and Solution Providers, Value Added Resellers, System Integrators, and Value Added Distributor community from India and create a knowledge based platform for the vendor community to reach out to these stakeholders.
Contact us: editor@channeldrive.in
© 2021 CHANNEL DRIVE | Maintained by BIZ2ROCK on DoUpLinux (D.U.L)
Page processed with175 queries in 1.103 seconds.